During our month-long summer trip to South Asia we visited five countries including Nepal.

We wanted to make the most of our short, four-day visit to the country so we debated flying somewhere to get a glimpse of the Himalayas, especially Mount Everest with our own eyes.

After landing in Kathmandu, a man at the taxi desk mentioned tours and even a special scenic flight to see the highest mountain in the world. Kim and I were intrigued and immediately starting debating if it was worth the expense.

We thought it over some more and then got pricing at our hotel and decided to go for it.

The chance to see Mount Everest up close and with our own eyes was an experience and opportunity that we couldn’t pass up. We woke up very early to get to the airport for our 6:30 AM Mountain Flight with Yeti Airlines.

The flight is known as the Everest Express. We could feel the buzz in the air at the airport as everyone at the boarding gates were there for the same objective, to get to see Mount Everest! After checking in, we were handed four large paper tickets (they’re definitely keepers) and a map showing the mountains which would be visible during the hour-long flight. After a short weather delay, we boarded a bus over to the runway where our chariot (plane), an ATR 72-500 was parked.

(The airline monitors weather and visibility to give everyone the best chance for spotting Mount Everest. This can often lead to short delays.) We took our seats on the plane, excitedly waiting for take-off! We took off and had some nice views of Kathmandu and then some mountains in the Himalayas started coming into view. Right above is one of my first views of Mount Everest. While the views were good and I was excited, the photos were a bit blurry. This was probably due to the dirty windows and also being pretty far away still.

During the fight, every passenger gets the opportunity to visit the cockpit for a view of the main event. Boy would this be an insanely amazing experience. 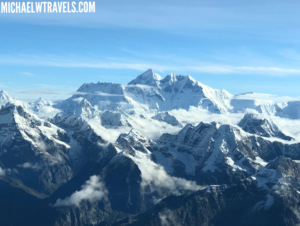 This photo and the one at the top of this post are my favorites that I took of Mount Everest. Both were taken during my minute I got to spend in the plane’s cockpit. (I still get chills thinking of this incredible experience!) While there, one of the pilots pointed out various mountains besides Mount Everest like Nuptse and Lhotse. After everyone has had a chance to view Mount Everest, a celebratory glass of champagne is served by the flight attendants.

I took a small sip before opting for a glass of tasty apple juice!

After visiting the cockpit, I sat in the aisle seat next to Kim on the right side of the plane. This allowed me to enjoy great views while heading back towards Kathmandu. In my opinion, the F side of the plane has far superior views than the A side. The only negative is that you have to wait longer for the views!

This photo was taken from the aisle seat while I sat with Kim. Lucas was excited for our flight but passed out within 5 minutes of take off. I felt bad that he didn’t get to see Mount Everest up close but when he found out that he missed the main event he said, “well at least you have some photos!”

To our surprise, our almost three-year old Theo stayed awake the entire flight and loved looking out the window at the clouds and mountains. He even helped Kim take photos with her phone! When the plane landed, the excitement continued. Most of the passengers took some time to take photos with the plane to commemorate the experience. I also took one with the special certificate everyone on board was given.

The crew on the ground were also really cool. They gave everyone as much time as they needed to take photos before we got back on the bus to head back to the terminal.

Overall, Kim and I were thrilled with our experience with the Everest Express flight with Yeti Airlines.

The airline and staff made the experience feel super special, the views were unforgettable and this is definitely the coolest flight that I ever took!

If or when we head back to Nepal, I’d definitely consider taking this flight again.

(We booked our flight through our hotel. As of when we flew, there was no option to book direct with the airline.)