Our trip to the Middle East Gulf States started off with a quick visit to Abu Dhabi, UAE.

During the second day of the trip we took a morning tour of the Abu Dhabi Falcon Hospital before heading off on our flight to Bahrain. Once we arrived in Manama, we had to figure out how we would get around to see some sites during our quick visit.

A bit of luck was on our side. We ended up being shown around by a local and had an amazing time in Bahrain thanks to Papa John’s…

Here is a recap of our visit to Bahrain. Our new friend Fadhel picked us up around 9:30 AM and we headed off on a day to see some of the sites that Bahrain has to offer.

We discussed what sites most appealed to us and Fadhel came up with the order to visit them.

Our first stop was the Tree of Life, a lonely tree in the middle of the desert, around a 40 minute drive from our hotel. During the drive, we chatted a lot with Fadhel about some other ideas for the day and he also told us a bit about the country.  We were also told how the tree was a popular spot but would be very quiet both at the tree and during the ride since it was Friday, a holiday when many things are closed in the region. After driving on modern highways for a good portion of the drive we then turned off onto a smaller road which had oil pumps and pipes running along  it. There were also Tree of Life signs along the way.

It was brutally hot out but we got out and enjoyed our visit to this bizarre, natural site. While there doesn’t seem to be any water around, the tree seems to be doing alright considering it is full of green leaves. The tree also had some graffiti on it and also seemed too heavy to hold itself up. If you look in the (2nd) tree photo above, you might see how a small log is propped up to support the branch Lucas is sitting on.

During our visit, after around 25 minutes, another car pulled up to visit and take some photos.

We enjoyed checking out the tree- posing for photos and mustering up the energy to jump for some of them.

Without a rental car or someone driving you, the Tree of Life would be relatively hard and very pricey to visit. As we drove towards our next stop, I had asked about Bahrain’s pearling history. We made a quick stop at an area where the pearling boats are still built today. (We had also noticed this area on the way from the airport to our hotel the night before.) We then made a stop at Arad Fort even though the concierge at our hotel mentioned it would be closed.

When we showed up, the gate onto the fort’s lot was closed but Fadhel went inside and spoke to the officer on duty. At first, we were told that we could not come in to look around but then Fadhel mentioned that his friend was in charge of the care for this fort. He made a phone call and a few minutes later, we were allowed inside to wander the perimeter of the fort.

I would’ve liked to have gotten inside the fort to see what it looked like, but I was still very happy to get some good photos from outside.

After the visit, Fadhel wanted to show us Amwaj Island, man-made islands that have very nice, waterfront homes and buildings. We did a drive around the area before making our next stop, another fort with a museum. 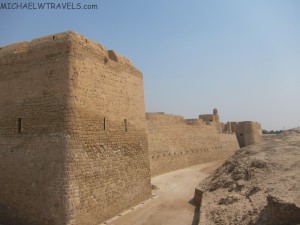 Bahrain Fort or Qal’at al-Bahrain is a UNESCO World Heritage site. The ancient harbor and Capital of Dilmun is recognized as an archaeological site which according to UNESCO, has “an artificial mound created by many successive layers of human occupation“. On top is a Portuguese fort from the 16th century which we got to go inside.

Our visit started in the well- done, modern museum (with great AC) which gave a good overview of the area along with lots of interesting pieces on display. The fort and excavation site is a short walk from the museum which seemed a bit far due to the heat! We did a walk around the perimeter of the fort before heading inside. There wasn’t much info inside but it was still definitely nice to see in person. I climbed up a stone staircase to the top and found it impressive to see the contrast of old and new. Through this old arch you can see across the water, the modern city filled with massive buildings

The Qal’at al-Bahrain and the museum are must visits during a trip to the country.

I almost forgot to mention- If I had listened to the hotel’s concierge, we would’ve missed visiting this impressive site since he told us it would be closed since it was Friday. Luckily we went to check it out for ourselves! We then did a drive through the downtown area to get some close-up views of the buildings. The only one I really had to see was the Bahrain World Trade Center. The three wind turbines, located between the two towers are an impressive site to see on a rather odd-looking building. After running around all day in the heat, we were all due for a decent lunch. One of the benefits of wandering around with a local is being shown a good place to grab a bite.

Fadhel suggested eating local food which Kim and I were totally game for. The only thing was that the restaurant was actually a Turkish grill! Either way, our lunch at Al Shoala totally hit the spot.

The place was busy and I’m pretty sure that we were the only non-locals dining there. Fadhel mentioned how the prices were affordable for anyone to dine here and the food probably better than a similar, fancy place across the road.

We shared up a big plate of mixed grill meats which were delicious. Kim and Fadhel also shared some salad which I do not eat. For our last stop we headed indoors where we could enjoy the air conditioning (and exhibits) at the Bahrain National Museum.

The museum had something for all of us to enjoy. Lucas really liked the interactive story area called Fables Across Time. We started and ended our visit to the museum here which worked out well. Just outside the fables area was this 1932 Buick which was given to the late Amir on the occasion of 60 years of discovering oil. It seemed like anyone walking by stopped to take a look at the car! The area I enjoyed most was the one which showed the different scenes of life around Bahrain. It showed work and home life and I also asked Fahdel about some of the things I saw and read about.

Overall, the museum, while not amazing is a good place to visit to learn about Bahrain and also cool off from the brutal heat outside.

A couple of things I missed:

Overall, Bahrain made for a solid visit. I’d say we could’ve even used another half day to check out the sites we missed.

Either way, due to Fadhel’s hospitality in showing us around, this made for a unique experience that money can’t buy…