Our last day of our trip to the Balkans was spent checking out Albania’s capital- Tirana.

While the city doesn’t have what I’d call must-see sites, we enjoyed the time we spent checking it out. Our original plan was to visit a couple of museums  but timing was not on our side. We happened to be there on a Monday when most of the museums were closed.

There were a bunch of things that we had planned to visit, so we took our time walking around and seeing them.

Here is what we saw: 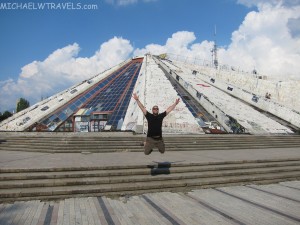 Piramida was one of the most interesting and ugly buildings that we saw during our trip and I have to say that I loved it. The building was originally a museum dedicated to the former dictator Enver Hoxha, designed by his daughter.

It was strange seeing this odd-looking pyramid while walking around the city. Today the building sits around half empty, with a TV station using some of the space. I tried to look inside but most of the widows were broken & boarded up while others were mirrored so you couldn’t see inside. Pyramida is located in a park which was a nice place to relax for a while. We saw this interesting sculpture (shown above) and had fun taking pictures and jumping over here. 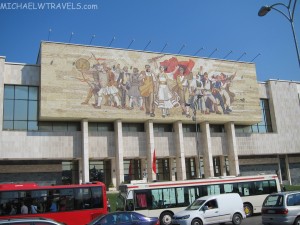 We planned to visit the National Historical Museum but it ended up being closed but we still walked by to see the huge mosaic “The Albanians”.

The mosaic was very interesting and in the style of Socialist realism. It was surprising to see such a big mosaic still so prominently visible in a country that hasn’t been communist since 1992. I read that the mosaic had been altered, removing a portion of the flag which had a large, communist star on it. This made me wonder why the stars were left on the hats of some of the people in the mosaic? The Clock Tower is one of the oldest structures in the city and offered some great views of the main square in Tirana, Skanderbeg Square.

We almost passed up the visit but decided to stop by to check it out since we were so close by. Next door was a small museum with a temporary exhibit on local Albanian clothing. I asked the representative inside about going to the top of the tower and was happily surprised to hear that it was free to climb! I wasn’t planning to pay to climb up the Clock Tower but when I heard it was free, how could I resist! The climb wasn’t much of a problem. I think there was around 90 stairs to get to the top, nothing compared to my run up the Empire State Building!

Kim and Lucas stayed in the museum while I went up. The views were great and I was glad that I visited. I tried doing some self shots which was not working out so well. Luckily, as I was about to head back down a couple arrived and was kind enough to take this photo for me. We had read that behind the Gallery of Art were some communist era statues which had been torn down/ removed from the city and saved.

I love seeing this kind of art. We saw a decent amount still standing on our trip around the Baltics years back so I wanted to visit the museum. Once again, being a Monday the museum was closed. We were walking by so I suggested that we try to get a glimpse of the statues.

We started out by walking to the back of the museum on the left and saw nothing but some cars parked there. We figured the information wasn’t accurate and we were about to give up. As we continued walking, I noticed that we could get to the back on the other side of the building. Kim waited as I went to go check it out. I was glad that we didn’t give up since I came across five communist era Socialist realist statues. Two of them were covered and I figured they were Lenin and Stalin since we had read that they would be back there.

Although the museum was closed, the front door was open and there was someone at the front desk. I went in and asked a few questions. The employee at the desk didn’t speak much English so he called another man out. The man confirmed that the covered statues were Lenin & Stalin. I asked why they were covered and he said that people would vandalize them if they weren’t.  I also asked if there were any plans to display the statues and he said there was some talk that they might eventually be shown at the museum. While heading over to see The Block, an area that used to be open only to government officials (and where the dictator Enver Hoxha lived) we came across this well-preserved bunker. (We saw many bunkers while driving throughout Albania. We learned that well over half a million of these concrete structures were build by the late dictator during the Communist regime.)

The bunker along with a section of the Berlin Wall (shown below) and concrete supports from a labor camp made up the Checkpoint- Memorial to Communism. It was interesting getting to go inside the bunker. The view from the narrow opening wasn’t so great. There was still some metal hinges inside, I assumed they were used to place weapons on.

After I called out to Lucas, he saw me inside the bunker and wanted to come in so I brought him down 3-4 steps into the bunker. It was pretty tight inside and not so easy to stand up so we didn’t stay long.

We also walked through The Block and couldn’t figure out which home was the former dictator’s residence. The area now is a very hip neighborhood with lots of cafes, restaurants and clubs.

This wraps up my coverage of our trip to the Balkans. Check back for posts about some of the things we did during our trip in more detail in the future.

Check out my other Balkan Trip posts: