McDonald’s isn’t a restaurant that we frequent while at home but it’s a must when we’re visiting international destinations.

We like to visit McDonald’s for a variety of reasons while traveling. I love trying out the local menu items available. The kids LOVE McD’s due to the toys. (The food is definitely secondary.) It’s also nice to eat something (relatively) familiar while away.

During our recent winter break trip, we made stops at McDonalds France a few times. From what I recall, one time was just to grab a quick dessert.

I hoped to see some traditional French items like crepes, paninis, croissants and other things along those lines but in general, I was a bit disappointed. The area McDonalds France excelled in were the dessert options.

Here is a rundown of what we tried during our visits to McDonalds France. The first item I tried was a burger called the  280 Original.

The sandwich looked interesting. The burger comes on ciabatta bread and is topped with melted cheddar & Emmental cheese and onions. 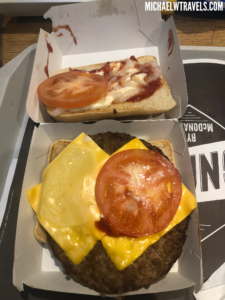 I removed the slices of tomato and then gave the 280 a try.

From the first bite, this burger was disappointing. The ciabatta was hard to bite into and chew, setting the tone for a bad burger. The burger patty itself was pretty nasty. The cheese was barely noticeable, too.

Overall, this might just be one of the worst McDonald’s burgers I’ve ever had. When I saw the P’Tit Bagel Cheese, I had to give it a try. I can’t recall ever having a burger on a bagel before so this definitely looked interesting.

I had a chance to order it while in Nice when we stopped into a McD’s for dessert. The lightly toasted bagel had sesame and poppy seeds on it. Inside, the burger was topped with lettuce, sauce and cheddar cheese. (When I looked up the sandwich online, I found out what I thought was mayo was actually American sauce!)

Overall, I was really impressed with the P’Tit Bagel Cheese. The main reason for this was the tasty, soft bagel. I’m pretty sure that I mentioned to Kim that it was probably similar to a frozen Lender’s Bagel, but it was totally enjoyable.

The burger on the P’Tit Bagel was like typical McD’s but it wasn’t really awful like the patty on the 280. As for the toppings, I liked the lettuce with this burger and the sauce was good too, although I thought it was mayo.

I’d order this again if I wanted a small burger from Mc’Ds. I find that most international McDonald’s tend to offer a fried cheese item. In France, I only saw this in the form of the P’Tit Wrap Crispy Mozza. (Later on, I noticed the mozzarella available in a box with chicken.) The wrap comes with one piece of fried mozzarella which has small pieces of tomato inside. There was also some lettuce and a sauce which I found out was tomato & oregano flavor. The fried mozzarella itself was OK, not that I expected it to be great. What made the wrap enjoyable was the item as a whole, thanks in part to the tasty sauce. When I saw the Deluxe Potatoes on the menu,  I wondered why they weren’t just called potato wedges! I’ve had this item in other international McD’s so I expected them to be good.

The wedges have the skin on them which is a nice touch. The outside is lightly crispy while the inside was soft and almost creamy. These potatoes are definitely a nice substitute for fries. From what I can recall, this was the first time ever coming across Pommes- Frites- Sauce aka French Fries sauce.

I was definitely excited to give it a try. The sauce is a thick white, mayonnaise like texture. There are noticeable flecks of seasoning in it, too.

The best way to describe the Pommes Frites Sauce would be as a tangy mayo. I really enjoyed it with the potato wedges and Lucas liked it on his fries. While looking at the dessert case, Lucas was really interested in this flan dessert. Kim and I thought it looked pretty gross but figured we’d let Lucas get a slice (and we’re glad that we did)! Lucas dug in and loved the flan. I gave it a try and was surprised by how good it was. It didn’t look appetizing but the flan was fresh and creamy and not overly sweet. I’m shocked to say that it would hold up to desserts we had in bakeries in France!

If we come across this again at a McD’s, we’d definitely order it again! The Canele is a tiny cupcake- like pastry. It’s has a carmelized sugar outer- crust and vanilla/ flan- like inside. The canele isn’t an easy dessert to share since it’s so small. I cut in half (which was no easy feat) to see what was doing inside.

Based on how hard it was to cut, the canele was a bit tough to chew. The flavor wasn’t bad, something like a mild vanilla but the texture ruined it for us.

I’d give the canele one more try if we came across it again. The McDonalds’s Gourmet Macarons were the dessert I most wanted to try.

During our trip, we had macarons at a couple of the best shops (Pierre Herme 2X & Laduree) as well as one other bakery. As a dessert, the macarons were one that the Michael W Travels family all really enjoy!

How would the McD’s version compare? Here are the flavors we tried:

The McD’s macarons looked pretty good compared to those from regular bakeries. We ate these on our flight home and really enjoyed them. The texture was excellent as were the flavors. A generous layer of filling was inside, quite similar to what those fancy macarons looked like.

My hands down favorite flavor was chocolate. The pistachio and salted butter sea salt were other top picks. Kim and I weren’t fans of the chocolate orange and I found the raspberry to be a bit too sweet.

Overall, for the price, the McDonald’s macarons are a great deal and offer an enjoyable cheaper version of a fancy French dessert!

McDonald’s France disappointed with their food options but the dessert options picked up the slack. (There were other desserts we didn’t get to try.)

It would be nice to see the chain add a bit more of a local feel to the food menu. I’ll keep my fingers crossed for the next time we visit the country!

3 thoughts on “What Did We Try At McDonald’s France?”