The second day of our trip to Dallas started off in a tasty and sweet way. We then dedicated most of the day to JFK before going for a late lunch at an awesome drive-in. Thanks to a fun evening, I can now proudly say this isn’t my first rodeo, literally.

Here is a list of some of the things we did: Kim, Lucas and I love good donuts and I wrote about Food & Wine’s America’s Best Donuts article a couple of months back. In my post I even added my own recommendation.

While reading about Dallas I came across a bunch of donut places. We made it a point to visit Glazed Donut Works to start off the day since they are usually only open until noon.

The shop was quiet when we arrived and we chatted a bit with the owners after ordering. It turned out that the donut shop was a new career for them and based on what we ate, it should end up being a very successful one.

I had a Maple Bacon Long John which is more of a donut bar. The donut itself was nice and fluffy and the maple icing and bacon on top put this over the top. I don’t think it would be very healthy, but I could eat this every day for breakfast!

I might write a full review of our visit in the future. It was very interesting walking around and visiting all of  the JFK sites in downtown Dallas. We found the John F. Kennedy Memorial to be a bit odd and I didn’t fully get what it symbolized. However, the sites around Dealey Plaza, a National Historic Landmark were very interesting and gave us a better understand of the JFK assassination.

Sites of note are Elm Street where JFK motorcade was driving when he was shot. Two “Xs” mark the spots in the street. There is also and area called the Grassy Knoll where an alleged gunman also fired at the president.  Close by is the area where Abraham Zapruder stood, getting the most complete filming of JFK’s assassination. The former Texas School Book Depository Building, where Lee Harvey Oswald (supposedly) fired the fatal shots is there too. The top 2 floors of the building are now the home of The Sixth Floor Museum. The Sixth Floor Museum is an amazing museum. There is a ton of information and its a great way to get an overview of John F. Kennedy’s life, presidency and assassination.

Prior to the visit, I didn’t know a whole lot about JFK. I always heard that he was one of the best presidents but never read into what he accomplished in his short time in office. The most interesting things that I learned was that he created the Peace Corps., supported space exploration and was involved in Civil Rights.

The museum gave great detail related to JFK’s assassination and it left me wondering if Lee Harvey Oswald was really responsible. The window that Oswald fired the shot from is behind plexiglass so you can’t go right over to it but you can look out the window in the same spot from the floor above.

One bit of advice if you are traveling with an infant or toddler. If you can, do not bring a stroller. The stroller was a real pain maneuvering around the crowds and tight spaces in some sections. Kim ended up carrying Lucas in the Ergo most of the time, so it was especially annoying pushing around an empty stroller. 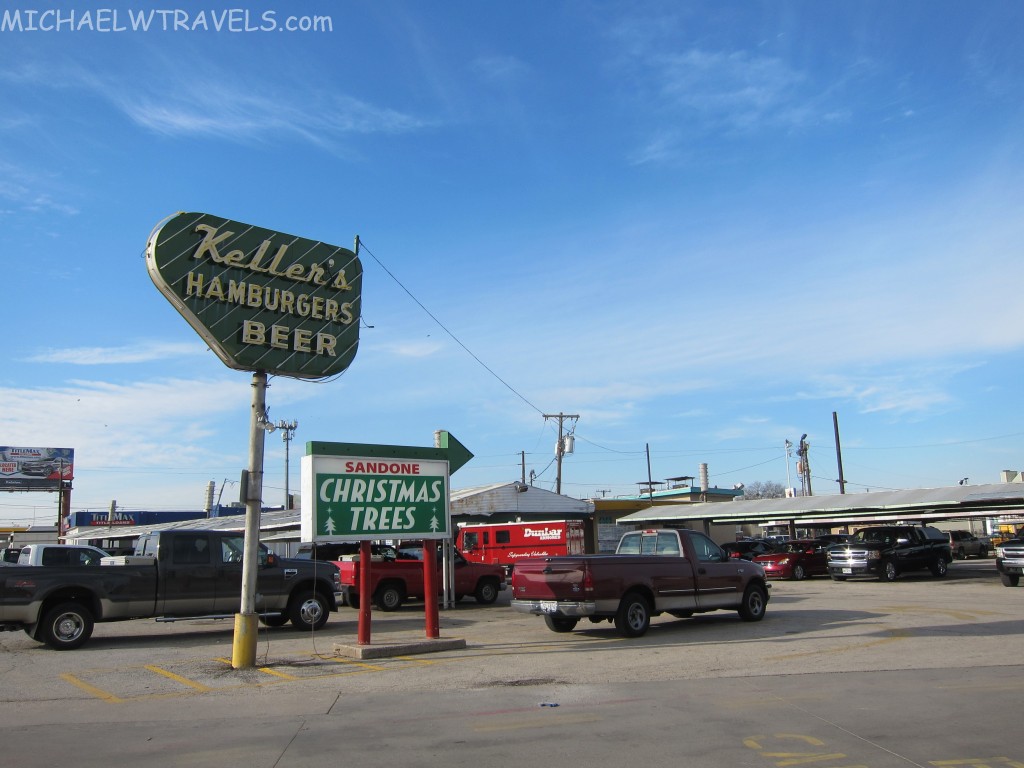 With burgers being one of my favorite foods, I did a search for the Dallas area. An article in Mens Journal came up called 18 Best Burgers You Should Try Now. The magazine got some help from burger expert George Motz, whom I’ve contacted in the past through Twitter for burger recs when traveling.

Keller’s Drive-In was on the list and it did not disappoint. I ordered the #5, which was recommended in the article. While waiting to order, a biker parked near us had suggest that I order the #5 too (I had forgotten that the article mentioned it), so that’s what I went with. The burger has double meat, cheese, lettuce, tomato and a special dressing. I took the tomato off since I’m not a fan.

The burger was pretty awesome. It had tons of flavor and the seeded bun was a plus and I really liked the special dressing. The arena wasn’t crowded. Due to the amount of empty seats I’d guess that this wasn’t a top-level of competition. Either way, my first rodeo was a lot of fun. Lucas enjoyed it too and I’d say that Kim didn’t mind. I would love to attend a rodeo again but I’d hope to see a packed house and louder crowd.

Thats all for our second day in Dallas. Keep checking back for a post about the final day of our trip.