We wrapped up our trip to Japan by spending the last two days in Tokyo.

While we got to see and do lots of great things there was also a bunch of things that we didn’t have time for. I was hoping to wander around more areas, visit the Japanese version of a $1 store and also planned to check out the Yomiuri Giants stadium (and possibly find tickets to a game). Our plans changed a bit when Kim got sick after lunch during the last day of our trip.

It was really awful that she got sick but in some ways we were lucky. If Kim had caught something in the middle of the trip it could’ve cost us a few days and not just a half day.
It really made me think about how easily plans could get ruined in an instant by stomach bug or multiple other illnesses.

Even with this problem we still had a nice (more or less) 2 days in Tokyo.

Here are some of the things we did: 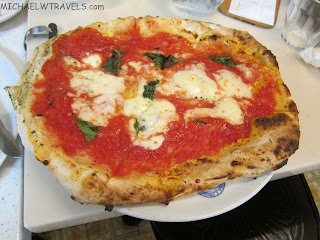 I’m a pretty big fan of pizza and try to visit new places near home every week. When planning our trip I decided to find out what the best pizza was in Japan. After some searching I came across a place called Pizzeria Da Isa. I read about it again in a Time Out Tokyo Top 100 pamphlet at the beginning of our trip. From the description it sounded awesome and worthy of a visit.

Getting to Da Isa was a bit of a challenge. We got off the train at the wrong stop and ended up taking a cab there so we wouldn’t waste any more time. This was the first and only time we made a mistake on the trains.

When we arrived the pizzeria was busy but we got seated right away. It was funny that our waiter happened to be from Italy and spoke perfect English. We ordered two pizzas and a calzone. Overall the pizzas tasted great but the second one came out inconsistently cooked. (Some spots seemed under-cooked.)  It seemed like pizzas were coming out too fast so they probably rushed this pie.

Regardless of this I’d still recommend a visit to Pizzeria Da Isa, The best part of the Meiji Shrine was seen at the beginning of our visit. The shrine itself didn’t look like much but the huge Torii gate at the entrance was impressive. The Torii is about 40 feet high and made from wood that is over 1,500 years old. It was also interesting to get off the train in the busy Shibuya area, step inside the park and feel like you are out of the busy city. I read about the Meguro Parasitological Museum on Atlas Obscura and had to check it out. The museum has two floors of exhibits dedicated to parasites. I expected for Kim, Lucas and I to be the only visitors but a bunch of other people were there too. Some of the specimens were pretty gross, including the world’s largest tapeworm! As gross as the museum sounds, it was pretty interesting yet nasty at the same time. I plan to write a post, mainly with pictures of what we saw at the museum in the near future. Whenever I think of Tokyo, pictures of their version of Times Square comes to mind. Being a native New Yorker (Brooklyn to be exact), I try to avoid Times Square and rarely go there. However, I had to see Tokyo’s version- Shibuya Crossing for myself.

We actually visited the area twice and found it to be pretty interesting. The lights were cool but not as great as I had envisioned them. The best part was watching people cross the streets- from all different directions whenever the lights changed.

There are tons of shops, restaurants and activity going on in the area and it could be hard to walk without bumping into someone. Visiting is a must during a trip to Tokyo. Just make sure to go at night. The Tsukiji Market was a frustrating place to visit. It was filled with highs and lows. I woke up at 3:30 in the morning to go to the tuna auctions which has very limited spots available. The auctions start around 5:00. When I arrived I wandered through the market even though it was closed. I wasn’t sure where to go to get a ticket for the auction. I got to see one massive tuna but didn’t get a photo. When I found the ticket booth at 4:15am the tickets were already gone.
Talk about a painful, waste of time and sleep!

I went back to my hotel and got some sleep and then we headed back to check out the market when it was open in the late morning. I loved seeing all of the action. People were busy shopping and inside the market, the fisherman were still busy butchering and selling the fresh seafood.

We saw lots of interesting fish and sea creatures and the fisherman were friendlier than expected. The visit made up for the painful, missed change at viewing the tuna auction. After finishing up our visit to the market, I wanted Kim to try sushi at one of the places near the market. I am not a sushi eater but Kim likes it so she had to try sushi where it is supposed to be at it’s freshest.

We walked by a couple of the more popular places and the lines were ridiculous. We weren’t going to wait since it wouldn’t be a good idea for Lucas.

We found another place that was very busy. We waited outside and soon after a line formed. After waiting about 5-10 minutes we were got seated. Kim really liked most of the sushi that she ordered. I tried some shrimp on rice which were very tasty.

About an hour or so later Kim started feeling pretty crappy. She had no energy and complained of really bad stomach cramps. We had to go back to the hotel earlier than we would’ve liked. After an uncomfortable night, we had to fly home the following morning. Kim went to the doctor the following day and was told that she probably got food poisoning from bacteria in the rice not the fish.

Overall our trip to Japan was an amazing experience. The people were some of the friendliest and traveling around the country by train was a piece of cake. Besides Kim’s sushi problem we really liked the food. We also saw some great sites along the way. Japan is also a great place to travel with a baby. Lucas seemed like a celebrity wherever he went. People stopped to talk to us, asked to take a picture with him and some even gave him little toys!

I plan to write more about some of our experiences from our visit to Japan in greater detail in future posts. Keep checking back!

Check out the rest of my trip reports about Japan: